Those of you who read my blog or follow me on Facebook are probably sick of me constantly talking about boots and shoes. If you’re one of those people, don’t bother reading this post because it’s all about boots. One boot, in particular.

Meeting Donald and Lisa Pliner at the Las Vegas shoe market was the closest I’ve come to meeting a celebrity. Well, I waited on Richard Marx in the 80s when I worked at Musicland but we didn’t actually have a conversation. Besides, I wasn’t then and I’m not now a Richard Marx fan. But I digress. Donald and Lisa aren’t exactly celebrities, I’d call them shoe-lebrities and in my book that’s even better. I’ve loved Donald’s work for years and have many styles in my closet, despite not wearing them to the show! I wasn’t very familiar with Lisa’s designs until Vegas, but I am now a devoted fan. I love her rock ‘n roll style. Donald gets my vote when it comes to cowboy boots and Lisa appeals to the rocker chick inside me.

When we met, Lisa was wearing a boot of hers that I adored. The sample was a size 6 but she graciously offered to let us try on the one she was wearing. Alas, she is not a 9.5, but a 7.5. My extra-large foot wouldn’t fit so Kathi tried them on. They were so cool! Caught up in the moment, Kathi placed an order for the store in a case pack that included my size and promised me the 9.5 when it arrived. The boots arrived on Wednesday and I immediately grabbed the 9.5 and put it on. Heaven. The leather is very soft, the platform is high enough to make the heel comfortable, and the footbed is padded. True to her word, Kathi allowed me to purchase my size that day. 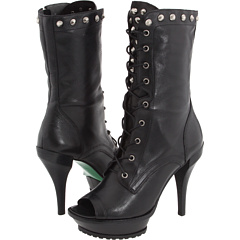 When I got home, I immediately started playing with the boot. I laced it up all the way and wore it with some rolled-up jeans. Cool, but the studs were hidden. Then I unlaced it halfway and let the studded tongue hang out. I liked it, but it kept catching on the cuff of my jeans. Finally, I folded the top down and wore them as an ankle boot. Score! Steve and I went out to dinner and the boots were such a hit, the women at the next table asked to see them and wanted to know where they could get them. I have a feeling that even though the toe is open, I’ll be wearing these a lot this fall/winter.

Of course, I have my eye on a couple of other LP styles including these fabulous thigh-high boots. Unfortunately, I’ll have to wait until they go on sale! 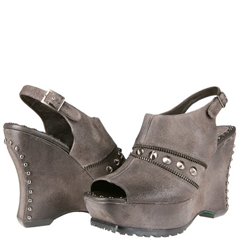 And just to be fair, here’s one of my favorite Donald J Pliner styles for the season:

Mmmm, python. I’m either going to need to increase my hours at work or get another job!

2 responses to “What’s This All A-Boot?”