Project number four is done for class and ready for tomorrow’s critique. The assignment was to create a ring that had a moving part (or two, or three depending on the design). My last project had two moving parts so I joked with Sarah that I’d already completed this assignment. Of course I knew she’d just tell me to create something more intricate than the last piece but that just didn’t seem possible to me. Besides, I was mentally exhausted and wanted a break but, being the overachiever I am, I knew that wasn’t going to happen.

My first idea was to cast those plastic telephone keychain parts from the 70s. Remember the Trimline models that had a handpiece separate from the base? I found some on eBay and planned to cast them to create a telephone ring. Then I thought about a piece that incorporated pinwheels that moved when the wearer blew across the ring. Both sounded fun, but I just couldn’t wrap my brain around them to make something I was excited about. I thought about what Sarah had told us at the beginning of class, when she created the syllabus, that she wanted us to have a cohesive collection of rings at the end of the semester. Many of my pieces had tube set stones in them so I decided to continue that look. My idea was a ring that had a line of tube set stones across the top that slid from side to side. I made a sample and it was a complete disaster but I knew where I’d made mistakes so I could easily correct them. I took the sample to class where one of the students, Sammie, suggested I set stones on either side of the tube and give them enough room to twirl around thus creating movement from side to side and around the bar. Good idea even if it meant more work. I decided on faux garnets and Cubic Zarconias for the stones to give it some interest and contrast.

I went home determined to carefully measure all my parts to insure this ring would be a success. I filed my tubes perfectly straight. I used both digital and manual calipers to measure my pieces and mark my holes. I cut the seats for my stones and they fit perfectly. I was feeling really good about things. I put the ring together, soldered the bar that held the tubes in place and cleaned up the entire ring to prepare it for the stones. Then I set the first stone. Hmm, it wasn’t setting right. Guess who forgot to measure the depth of the stone? Dammit! Well, there was no turning back since I had no room to raise the bar so I had to make it work. To the untrained eye, it looks good. To me, and anyone who’s ever set a stone, it’s a mess. But I’m pleased with the outcome anyway. 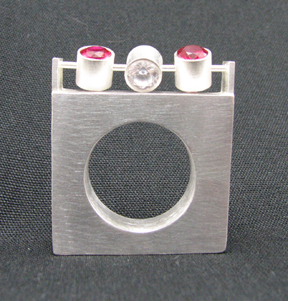 The ring fits my middle finger and measures about 2″ wide. It’s comfortable to wear but a little thick. If I made another one I think I’d curve in the sides to better fit my fingers. And I’d certainly measure the depth of my stones!