It all began with a leak and ended with a complete overhaul. Naturally, it took longer than expected and cost more than planned, but the bathroom is done and the final results are worth the hassle of construction. We were reluctant to change anything in it, but were forced to when we realized there was no way we’d be able to match the existing parquet floor. Our goal was to honor the original design of the house, but create a modern, timeless bathroom. I think we accomplished that.

You may remember an older post about how we chose slate for the new flooring. We were very pleased with the results and plan to put the same slate in the other bathrooms in the future. 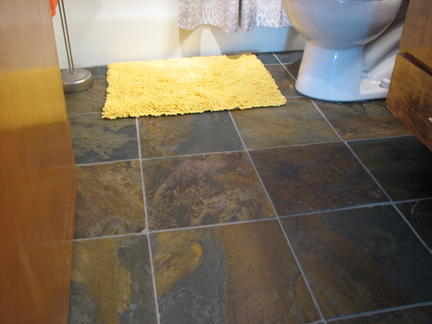 The colors are perfect in the house and we love the look. Because the damage to the floor had seeped under the old vanity, the vanity had to be removed to repair the floor. Unfortunately, the vanity was built into the wall and couldn’t be saved. Pavel suggested we create a floating vanity that attached to the wall, but didn’t reach the floor. I love the color of the wood and think it compliments the floor colors. I also like the design of two doors and a drawer underneath for towels and such. 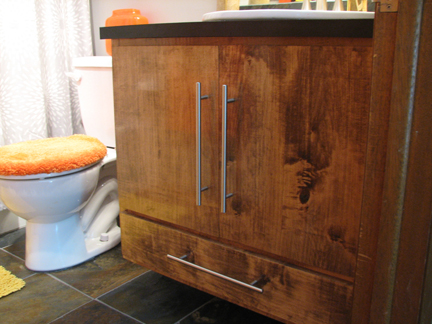 Pavel made new vanities for both sides since the bedroom side of the bathroom is so much smaller. His custom work is outstanding! The only thing we didn’t fully agree on was the vanity top. I insisted on black matte formica and he hates formica. I reminded him that we were paying for it so he had to do what we wanted! I think the results are great. 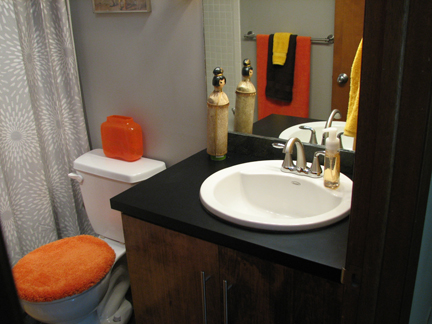 As you can see in the mirror’s reflection, the color scheme is gray, yellow, orange and brown. I originally wanted orange walls, but realized, when I tested the color, that it was too much. Then I thought about chocolate, but it was too dark. Gray is perfect, although I could have gone a bit darker. Still, I’m pleased with the results.

Remember how this all started with just a floor? Well, once the floors got redone and the vanities were created, Steve and I decided it was time to consider tiling the shower. The old shower tile was still in good shape, but someone had put silicone sealant on it and the grout was all yellow. Plus, removing the vanity on the bedroom side of the bath had left an untiled area on the tub where the vanity had been attached. We decided to stick with white tile, but took off the shower door (only one side had it) and put up two shower curtains instead. Since the tile was being redone, we had Pavel raise the shower head about 12 inches. 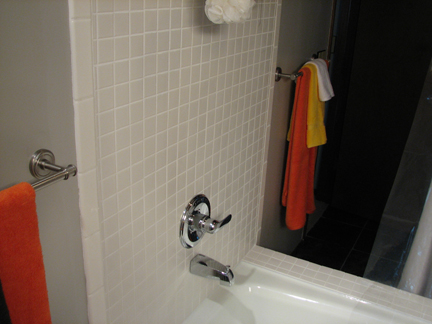 All in all, it’s perfect for us and stays with the design of the house. We hope Harry (the architect and original owner) would be pleased. I know we sure are.