Wow. Has it really been two weeks since I’ve written? I have no excuses except I’ve been busy and haven’t had anything to write about. So, rather than bore you with the mundane crap of daily life, I’ve waited until I’ve had something interesting to talk about. Ok, it’s not really that interesting, but I did take pictures!

As I posted before, we recently renovated the bathroom and, as usual, one project leads to another. While we didn’t have a budget for another bathroom overhaul, I did want to make some changes to other parts of the house. We have a great area, right off the kitchen, we refer to as the coffee area. Originally, it was the dining room, but we use what was the family room as our dining room because we wanted enough space to completely spread out the table. Plus, it just works better for us. Before we moved in, we purchased two leather barrel chairs thinking we’d use them in the living room. I thought I wanted a Saarinen-style table and chairs for the coffee area, but realized that two table and chair sets on one level would look weird. The barrel chairs didn’t really work in the living room so we put them in the coffee area. Eventually, we added a third barrel chair (an antique from Steve’s grandparents) to the area. All was great except when we had guests. It’s just natural for everyone to want to gather in that area and three chairs just don’t work.

I recently found a set of white leather chairs at my favorite store, Funtiques, and wondered if they’d work with the black barrel chairs in that area. Thus began another project. Funtiques had four chairs but were willing to sell them in sets of two. I couldn’t decide how many to buy. Then, I couldn’t decide whether or not the white would work or look too stark. Steve and I discussed pros and cons of two versus four chairs. We moved furniture, we rearranged the area, we talked ourselves into the chairs and back out of them. Then, I went out and scoured all the decent flea markets in the area until I came back to Funtiques (for the third time in a week, I might add). What’s really comical about this is that the chairs were really cheap. This wasn’t about money at all!

Friday I made my final decision to buy two of the four chairs. I was so excited to get them home and get things arranged, except I overlooked one little problem: the chairs wouldn’t fit in my car. Now, I could have waited until Saturday and Steve and I could have put them in his car, but that’s not my style. Instead, I called my father-in-law, Pete, and sweet talked him into leaving his gardening project to help me with the chairs. What a great sport he is! He came right over and we loaded up the chairs and got them home. (Thanks again, Pete!) By the time Steve came home from work, the coffee area was done and I was so happy with the results. Here’s a look at the final rearrangement:

I love the look of these white chairs! I’m tempted to go get the other two for downstairs.

We moved the stick lamp over and are still trying to figure out the space on the orange wall. We might move the picture or I might find something else to put there with it. 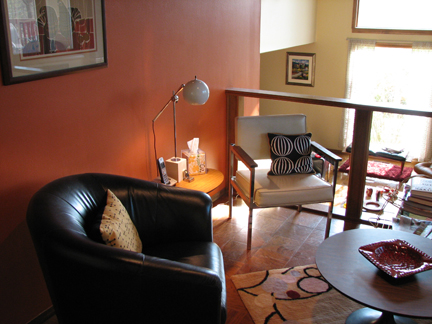 Now that everything is arranged, I’m laughing at myself for making such a big deal out of buying the chairs. I love how they look and the fact that the backs are as stylish as the front. Now I need to go refill my coffee and really start my day.