Well, we bit the bullet and bought a new car. Not just any new car, the Honda Fit, a hatchback Civic, I guess. It was a tough decision because it meant trading in the car Steve and I bought less than 6 months after we were married – our trusty Honda Civic. This little gem has given us absolutely no trouble in the almost 12 years we’ve had it. It had only 109,000 miles on it and was still in great shape cosmetically, but reality told us we were living on borrowed time. Steve has been doing more traveling for work and needed a reliable car for the trips.

Wednesday evening Steve poked his head in my studio and asked me if I had a minute. I knew by the sound of his voice and the look on his face he’d brought home a car. We drove it around and I knew, if we could afford it, the car was going to be ours. After some number crunching and a reality check (did we really need this?) we bought it and it’s been fun toodling around town in it.

So, I give you the new TASK (that stands for Tammy and Steve Kirks) mobile: 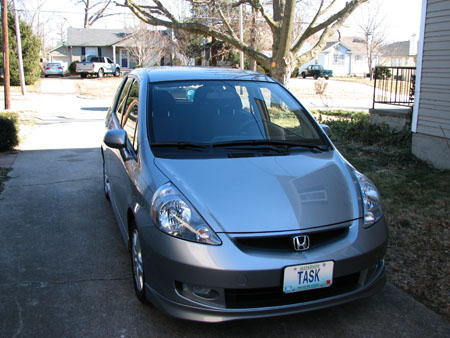 7 responses to “A Perfect Fit”